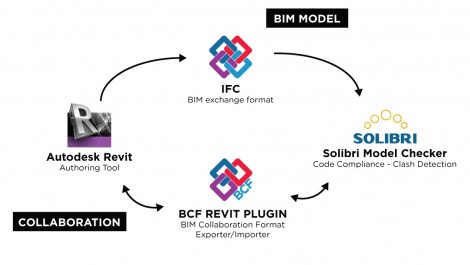 Tekla Corporation and Solibri, Inc. have introduced to the buildingSMART organization an idea of using open standards to enable workflow communication between different BIM (Building Information Modeling) software tools. These firms have developed such a XML schema, called BIM Collaboration Format (BCF), to encode messages that inform a software package of issues found in the BIM model by another software tool. The implication is that only those issues and not the entire BIM need to be communicated between software and that this simple capability will enable a degree of collaboration.

During design reviews, various action items are identified. These are then acted upon by the various members of the project team. But how should these action items be transmitted? The answer comes from clash detection tools that identify a clash in 3D coordinates, associates an offset camera position to display the condition, then appends the action item to be taken, as identified by the parties involved. Originally this capability was limited to the clash detection application, such as Navisworks. However, transmitted in XML, the action item could be eventually imported into any BIM platform and displayed for the user to act on. The use can be much wider than clash detection; it can be used for any type of review, whether automated (such as generated by Solibri Model Checker) or carried out manually through an in-person meeting or Web conference. The benefit of BCF is that it directly loads and runs in the BIM design platform that generated the component of interest.

This XML schema and capability have already been built into several software package including, Tekla Structures, Solibri Model Checker and DDS Architecture. BCF has also received interest from other vendors as Autodesk, Eurostep, Gehry Technologies, Kymdata, MAP, Progman, and QuickPen International. Initial experience shows that it would provide a much improved workflow as well as a reduction in the transfer of large BIM files over the internet. This is an example of unexpected innovation that buildingSMART must cultivate and encourage. The original developers wish to transfer the ownership and rights of the BCF schema to buildingSMART for adoption as an open standard and maintaining it for the benefit of the industry.

The BIM Collaboration Format is currently a pre release, submitted to buildingSMART under the new “Affiliation Scheme” to become an official buildingSMART specification.

BCF introduces a workflow communication capability connected to Ifc models. The idea is to separate the “communication” from the actual model.